Life lessons in the lab

The name of the class is Everyday Chemistry but the experience inside Room 2007 Ogden College Hall is anything but ordinary.

Instructor Amanda Brooks begins with a not-so-simple question for the dozen rising seventh, eighth and ninth graders: What IS chemistry?

They quickly establish that chemistry is the study of matter, which of course begets the question: What is matter?

“Everything!” “All that you can see!” “Everything around us!” “Things that have mass!”’

“Everything that you’ve said is true,” Ms. Brooks says. “But it’s missing pieces.”

With a little prompting, the group comes to the definition that matter is anything that has mass and takes up space.

“Do you matter?” Ms. Brooks asks before answering, “You do. You’re a big hunk of matter and you do matter.”

From there she leads the class through lab basics: never eat or drink in a lab, don’t lean on the tabletops, treat the equipment with care, think, and be curious.

“This week I’m trying to get you to think,” she says. “I want you to be good at being curious. I want you to say, ‘Why did that do that?’ and ‘I wonder what would happen if I did this?’

“Don’t lose curiosity, that’s the kind of thinking we need people to have. If you’re never asking questions, we’ll never have new answers.”

The first experiment gives students the freedom to do that kind of thinking. An exploration of chromatography, it is designed to separate the inks that combine to make the colors of Sharpie markers.

Students put three dots of any color marker near the bottom of a thin-layer chromatography strip. They then add the strip to a jar with a solvent in it, cap the jar, and watch what happens. Each student is given supplies for three strips.

After outlining the process, Ms. Brooks notes that the process is the only thing all students need to do the same. The rest of the experiment is up to them. They can choose the colors they want to investigate, and they can pick which solvents they want to try.

Calvin B. puts seven different colors on his three strips; Simran L. goes with green, orange, and blue; and Kinsley B. opts for purple, orange, and yellow. David A. takes a unique approach: He tries one dark blue dot, one light blue dot, and one dot that is layered with light blue and dark blue. When paired with the solvent, the resulting strip features a perfect blending of the two colors.

After a reflection and cleanup, it’s on to the next experiment, one that 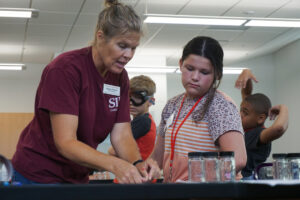 illustrates the law of conservation of mass. The items on the table – baking soda and vinegar – are familiar, but this experiment goes beyond the typical model volcano.

The students place a spoonful of baking soda into a plastic, sealable baggie. Next, they add vinegar to a small vial and then gently set the vial upright in the bag. After sealing the bag, they carry it to a scale, careful not to tip any of the vinegar into the baking soda.

Each student weighs the baggie and records the findings. Then it’s time to check that the bags are sealed, tip the vial, and get ready for a reaction.

The liquid and solid mix, and the bags rapidly expand and are cool to the touch. “I expected it to be hot!” says Lillie S. Ms. Brooks explains that many people expect reactions to produce heat but not all reactions all do. This experiment is endothermic, meaning it absorbs heat.

When weighing the bags after the reaction, students find that the weight is slightly less than the starting weight and determine that is likely due to gas escaping from the baggies. Although changes have happened inside the baggie, the mass has more or less stayed the same, and that shows the law of conservation of mass.

A lot of learning is packed into the 90-minute class, but not all of it has to do with experiments and chemistry. Ms. Brooks hopes that her students will hold on to this takeaway: “There will be a day when you want to dig a hole and crawl in and eat worms. And that’s when I want you to look in a mirror and say: ‘I’m a big old hunk of matter and, by golly, I do matter.’ “