Discover campers to the rescue! 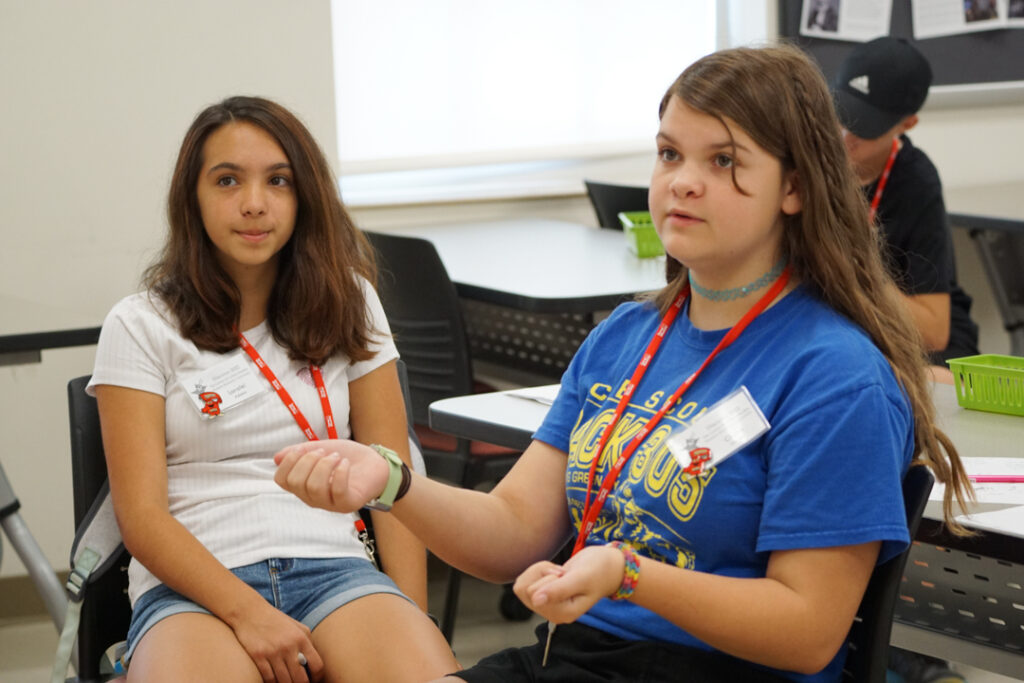 Disaster looms daily in Room 2017 of the WKU Honors College and International Center, and it’s up to the Camp Discover students in Madison Moss’ Engineering to the Rescue class to save the day.

After starting the week with the challenge of developing a way to walk across a lava field, students moved on to water safety and personal flotation devices, or PFDs. They discussed the components of PFDs and how they work, then explored the idea of density and why some objects float while others sink.

Then came time for the challenge: to create a PFD that would keep someone afloat using only the materials given. No pool was available to test human-sized prototypes, so a stand-in was found: a can of cream of chicken soup. Students were challenged to create a single device that could be put on the can within 20 seconds and support the can so that the top quarter of it was out of the water for 1 minute. The device could not be attached to the can but, like a human PFD, needed to slip on and off with ease.

The campers split into two teams – boys against girls — and were given 15 minutes to consider the available materials (baggies, foam packing pieces, foil, foam sheets, straws, balloons, and more) and brainstorm ideas. They then chose an idea to try and created a diagram. Before beginning their builds, the teams exchanged drawings and talked about potential problems and solutions. Finally, the building began!

With only 15 minutes to turn their drawings into devices, the campers got right to work. Both teams opted for designs that relied on balloons to provide support. The boys were the first to try their luck, and it seemed as if they had a winning design, until it was noted that the balloons were wedged against the sides of the test tank – and unfair advantage perhaps? The girls had a solid idea with foam packing pieces wrapped in foil and supported by a balloon, but the can proved to be too heavy. A quick reassessment was in order, then try, try again.

Students ended the day reflecting on their successes and what they could learn from their failures for future engineering challenges. After all, with two days to go, another disaster is sure to strike!