VAMPY Student, Will Walters, on Jeopardy 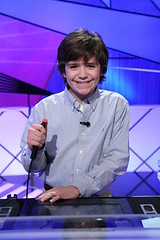 VAMPY participant, Will Walters, was a star today, appearing on television’s Jeopardy. Here at The Center for Gifted Studies we hear he performed very well on the annual Jeopardy Kids Week.

We hope you get a chance to read the article in the July 5, Lexington Herald outlining Will’s academic abilities. The Herald has some nice things to say about Will and his talents!

In addition to being enrolled in all accelerated courses at school, Will took the SAT, a college entrance exam, last year and scored in the top one percent in the nation, a statistic that includes high school students, his mom said. For that achievement, Will was awarded “grand recognition” by Duke University’s Talent Identification Program.

This summer, Will is attending VAMPY, the Summer Program for Verbally and Mathematically Precocious Youth, at The Center for Gifted Studies at Western Kentucky University, but he plans to be home Tuesday to watch his Jeopardy performance with friends and family.

Read the Full Story on the Lexington Herald News Website